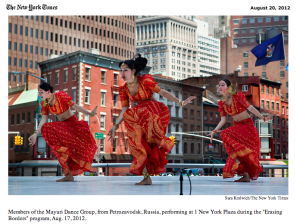 The Russian dancers — the Mayuri Dance Group, from Petrozavodsk — were big hits, performing eight numbers with zest, glee and an array of costumes so admirably vivid that audience members exclaimed about them. Combinations of azure with gold, emerald with cream, and black with scarlet flooded the cityscape with color. The dancing, often with lip-syncing and flashing eyes, had all of Bollywood’s engaging vivacity. As so often in Bollywood, shoulders or pelvises would throb to the beat like pulses.

We found a lot of groups from India that were more interested in fusion. But we didn’t want a rap group. We wanted someone who could authentically present the dances. And Mayuris are excellent performers.

Perhaps the most eye-popping dance-travel story was that of the Mayuri Dance Group from Russia. These stunning dancers dazzle with Bollywood numbers as if they’ve been weaned on them, and many of them speak Hindi, Rajasthani and Punjabi too! Indeed, theirs’  is a dramatic case history of how Bollywood has infiltrated other cultures.
Mayuri Dance Company showed its expertise with several eye-catching and foot-tapping numbers from Bollywood, from ‘Nimura’ to ‘Chamak Chalo’, including the classic Geeta Dutt number, ‘Mera Naam hai Chin Chin Choo’ which is from the Ashok Kumar-Madhubala starrer ‘Howrah Bridge’ and which was immortalized by the one and only Helen. Yet here the young Russian dancer  brought her own choreography and joie de vivre to this number.
The exuberant dancers even did a bhangra in drag, bringing audience members to join in a joyous free for all on the stage, with the boisterous, “Jat Ho Gaya Sharabi.”

The most curious of the four was perhaps Mayuri, a Russian troupe from Petrozavodsk, which turns out to be the capital of Karelia, in northern Russia. Can one imagine a more unlikely place to find a company sweating through high-energy Bollywood routines? Russia certainly has a strong tradition of dance, and the women of the company were remarkably polished, graceful, and enthusiastic. It only added to their charm that one of the dancers looked so much like a Russian doll, and another bore a vague resemblance to Natalia Osipova, with her pale skin, enormous eyes, and jet back hair. Ksenia Sigalova, who seemed to be one of the leads, had extraordinarily lively eyes, and lip-synched every song. She danced what, to me, was the group’s most appealing contribution, a rock-and-roll number with the delightful title Mera Naam Chin Chin Chu (from the 1958 film Howrah Bridge) and the refrain “Hello Mister, How do you do.” This Indian-tinged jitterbug reminded me of myriad dance sequences in Italian films of the same period (a genre particularly dear to my heart), like Guarda Come Dondolo (from Il Sorpasso) and Renato Carosone’s infectious Tu Vuò Fa L’Americano. The allure of 1950’s American culture seems to have been nearly irresistible. 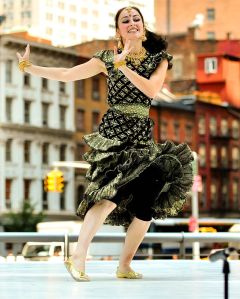 The Mayuri dancers kept the charm flowing throughout the afternoon, but none was more captivating than Ksenia Sigalova, who danced a solo to “Mera Naam Chin Chin Chu,” an upbeat, rock-infused song from the 1958 film Howrah Bridge. The choreography, a mix of East and West, had Sigalova stomping wildly, tugging at her skirt, shuffling from side to side, and wiggling her hips, but the twists of the elbow and wrist were unmistakably Indian. The solo was the zaniest and hammiest part of the program, verging on ridiculous, but Sigalova gave herself to it completely. Her enthusiasm was irresistible.

Culture of Karelia is appreciated in Russia and in the whole world, and Mayuri brings its essential and powerful contribution to a variety of cultures of the republic. Mayuri is one of the visiting cards of Karelia. It is not just the ensemble, it is the way of life of people who have devoted themselves to studying history, culture, and traditions of India.

Russian Dance Ensemble – Mayuri epitomized this year’s theme in how a Russian dance school in remote places of Russia was able to foster, highlight and share Indian artistic traditions across geographic borders, Led by Evgrafova Vera Ivanovna. This incredibly talented group of 18 beautiful Russian women showcased Indian traditional and modern dance styles with such aplomb.
Their mastery of various Indian dance forms, from classical to folk and modern Bollywood, along with their elegant yet energetic performance had the audience spellbound and mesmerized. As a fitting finale, the event wrapped up with a colorful display of fire works.

Over 500 km north of St Petersburg, reaching out to the Arctic Circle, lies the Karelia region with its quaint capital, Petrozavodsk. In winter it resembles neighbouring Lapland, frozen, bitterly cold. But in summer, when the midnight sun keeps the entire region illuminated, it becomes one of the world’s most environmentally benign regions. Its numerous lakes are lined with fir trees and the cool waters are home to the most exquisite fish.
In this habitation would you expect anything Indian? The almost contiguous lands across Finland are universally known as the home of Santa Claus or Father Christmas; reindeer roam the woods. But on the Russian side, in Karelia, a group of Russian women under the guidance of Vera Evgrafova has dedicated itself to Indian dance and music. The group calls itself Mayuri. So exquisite is the dance of these self-taught enthusiasts of Indian culture that not only must the ICCR take note of them but Prime Minister Vajpayee, during his visit to Russia in November, must also find some time for this ensemble of over 100 Russian women. I have seen great enthusiasm for Sanskrit studies in the Baltic republics, but this is quite breathtaking.

Happy Republic Day, India!
Друзья, спасибо, что вы с нами! У нас самые лучшие в мире зрители😍😍😍
Today is the day!!!
Осталось меньше трех дней! До скорой встречи, друзья!
Ровно 2 недели до концерта ансамбля Маюри! Успейте забронировать билет! Очень ждём встречи!✨
С Рождеством дорогие друзья!
Русский текст прочтите, пожалуйста, ниже!
Morning, friends! You were asking for many times - and we decided to make a pilot video of learning dance from Mayuri! Check it on our YouTube channel (clickable link in bio)! Will be happy to get your feedback on that!
Check Mayuri's new video on our YouTube channel (clickable link in bio)! Ahh, what a pleasure to say this again🔥
Dear friends,
Happy Diwali dearest friends!
Tomorrow, on November 4th, Indians all around the world will celebrate Diwali, the festival of lights, that symbolizes the spiritual "victory of light over darkness, good over evil, and knowledge over ignorance". It's also known as the day when Lord Rama returned to his kingdom Ayodhya with his wife Sita and brother Lakshmana after defeating Ravana and serving 14 years of exile.
Help #BringMayuriBack!
Dear friends, to read this text in your language, tap "see translation" below.
Happy birthday to our one and only Guruji!❤️❤️❤️❤️❤️
May the wonderful occasion of Navratri be full of high spirits and bright colours, happiness and prosperity!
To all our indian friends out there - Happy Independence Day! May this beautiful land of dance and music be always free and prosperous!🇮🇳
A new dance season is officially open! All @dancemayuri members came back from July vacation and started working on new projects. Photos from yesterday performance✨
Watch full video of #DilBoleHadippa by @dancemayuri youngsters on our YouTube channel (clickable link in bio)!
Meet Mayuri's little stars! Surely they would shine even brighter, if you show them some love in comments!