History of Mayuri reflects years and years of earnest work of hundreds of people comprising several generations of dancers, led by their one and only leader; work done with amazing enthusiasm and now bringing astounding results and recognition. Mayuri’s history is not just sequence of events for its members. It is their journey consisting of small and big wins, breakthroughs, gaining knowledge, new acquaintances. It is always there in their memory in form of pleasant reminiscence…
This history was rendered in this eight minute flick at concert, devoted to 25th anniversary of Mayuri.

Indian dance and history of Indian culture studio was founded in 1987 at the Railway Workers Cultural Centre of Petrozavodsk, Republic of Karelia, Russia (Soviet Union). Its creator was Vera Evgrafova. The purpose of creating a studio was unifying people interested in the culture and traditions of India. When there stood out a team of studio members who could, there arose the need for creating a dance group and choosing its name. 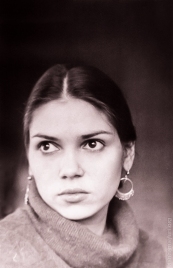 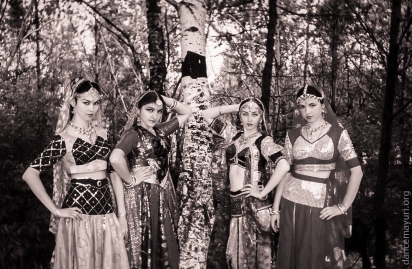 It coincided with the release of the South-Indian movie “Mayuri” which gave the cold shivers to all the members of the studio. Sudha Chandran, a dancer who lost a leg in a car accident, for who dancing was the her lifework, played herself in the movie – suffering, at times falling into rage and then surrendering herself to despair, persistent, undefeatable Mayuri. So the name of the group came as giving tribute of admiration to the heroic dancer. “Mayur” means “male peacock” in Hindi, so “Mayuri” is a “female peacock” respectively. 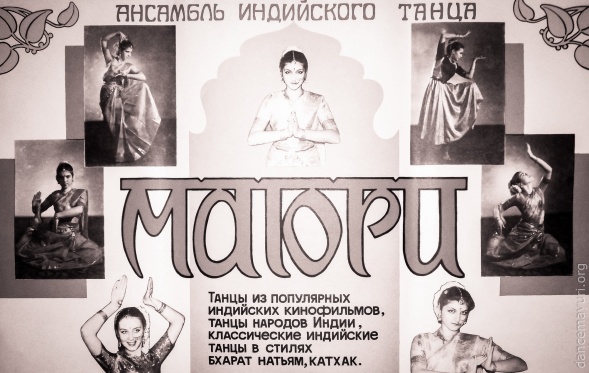 The members of the dance group had a library that had been collected by the leader of the group Vera Evgrafova for long years. It included various books in translation from different languages of India, novels, stories, poems, travel notes, books on art, classical and folk dance, architecture, painting. Besides this book collection there also was a collection of magnetic tapes, records, audio and video cassettes, audio and video discs. All this was in high demand because according to Indian tradition dance education is inseparable from music, singing, painting and design education. Beside it costume sewing, embroidery, paillette work and learning Hindi were included into the curriculum.

In spite of the fact that parallel training in various dance styles is not commonly accepted in India, programme learning in Mayuri included 4 main styles: two classical styles – South-Indian Bharat Natyam and North-Indian Kathak, folk dances and “Bollywood” dances. Its aim was to make students more versatile as well as introduce multi-faceted Indian art to people of Karelia. Every year the repertoire of the dance group extended up to 8 dances on average.
Such diversified activities aimed at understanding the very essence of the Indian dance art could bring the only results, that in 1989 “Mayuri” became the winner of the city contest of the dance groups, and in 1991 – the laureate of the Republic festival “Zdravstvui, mir!”. In 1995 the Ministry of Culture of Karelia awarded “Mayuri” the title of “Narodniy”.
Creative activities of the dance group were highly appreciated by the Indian side as well, and the solo dancers of the dance group Elena Fiskovets and Natalia Fridman were granted with government scholarships for undertaking a tuition course in dance institutions of India. The dance group’s soloists’ training in India (1996-1997) gave a new impulse to the group’s activities.

In October, 1997 the dance group celebrated its tenth anniversary by staging a large theatrical performance “Princedom of Mayuripur”. That production represented a brand new way of performance holding. All explanations and comments on the dances were given in the form of dialogues between characters. Thus we were able to include various dances in the plot – ancient and modern, facetious and serious, classical and made to film music. The performance was highly appraised by the media and the audience. It left such a deep impression on the little viewers that the group of students accumulated just after the performance became a basis for the “Mayuri” junior group led by Elena Fiskovets. 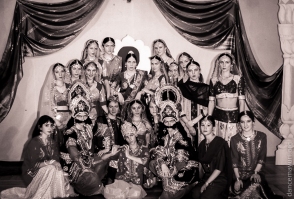 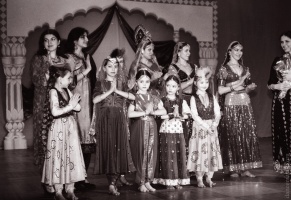 At the beginning of 1998 the dance group participated in the All-Russian dance contest “Tikhvinskiy Lel” in Tikhvin where it became a laureate. A gala celebration dedicated to the victory and awarding Ms. Vera Evgrafova the title of “Honored Worker of Culture of Karelia” was organized in March. 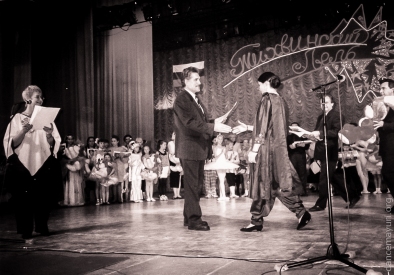 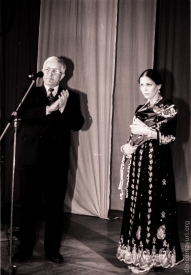 The same month “Mayuri” prepared a mini-version of the “Princedom of Mayuripur” and presented it to the jury and audience of the All-Russian dance competition “Orlyata Rossii” (All-Russian Centre “Orlyonok”, Tuapse). For its competitive program “Mayuri” dance group was given the highest award of Grand-Prix and the title of laureate.

In September 1999 on invitation of Attaché of the Embassy of India, the director of the Jawaharlal Nehru Cultural Centre Mr. Ashok Sajjanhar the members of the dance group participated in the Indian Classical Dance contest held in Moscow. Сlassical items in Kathak and Bharat Natyam were presented to the jury and audience by 8 soloists of “Mayuri” who performed in two age categories of 7 to 15 and 15 and above. Having won 2 prize awards, the Jury’s Special prize, the Audience’s Special prize and the prize of the “Ballet” magazine, the members of the dance group were declared the best team having presented its programme in the contest. 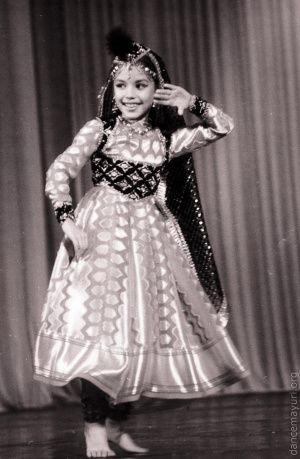 On May 21st, 2000 the Karelian Regional Public Association “Karelia-India Friendship Society” was established at the basis of the “Mayuri” dance group. The aim of the creation of the Friendship Society was promotion of the Indian culture, introduction of the works of Indian art to the people of Karelia, organization and holding of festivals, exhibitions and other mass events dedicated to the history and culture of India.

In April 2001 The Days of India were held in Petrozavodsk, Chrepovets and Vologda with the participation of the Embassy and General Consulate of India in Russia. “Mayuri” was granted the honor of representing Indian dance culture in these cities. On the invitation of the spouse of Mr. Ambassador Mrs. Neelima Lamba “Mayuri” took part in a theatrical performance “Indian wedding” organized by the Indian Women’s Association in Moscow. Upon the recommendation of Mr. Lamba a renowned Indian journalist Saeed Naqvi came to Petrozavodsk to meet “Mayuri”. He made a video report on the dance group’s activities which was shown on the Indian television.

“Mayuri” keeps on broadening creative contacts with the country, art of which has been pursuing for many years. Sometimes members of the dance group go to India to gather classical and folk dance material. They have mastered such popular dance styles as Bharat Natyam, Kuchipudi, Mohiniattam and Kuravanji, and they are pursuing their training in Hindustani and Carnatic music styles. In 2008 the dance group participated in two prestigious Indian national festivals: the “Taj Mahotsav” in Agra and the “Kerala Mahotsav” in Kannanur and was highly appraised for its creative art. 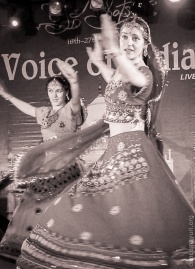 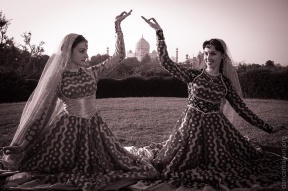 In October 22, 2011 Mayuri visited the United States of America at the invitation of Hum Sub Inc., NC for participation in Cary Diwali Festival in North Carolina, USA. This festival was supported by the Town of Cary and attended by almost 10,000 people.

In August, 2012 Mayuri again was invited to the United States, at this time to perform at the event called “Erasing Borders: Festival of Indian Dance” held within the 31st Downtown Dance Festival in New York City, presented by Battery Dance Company and Indo-American Arts Council. The enthusiastic endorsement of Alastair Macaulay, usually reticent New York Times dance critic, denoted that Mayuri had performed with real eclat. 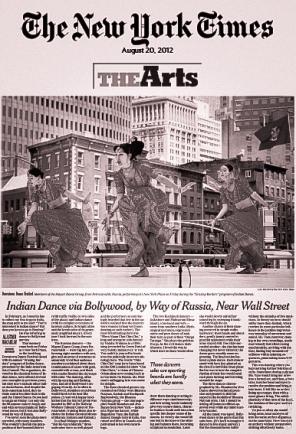 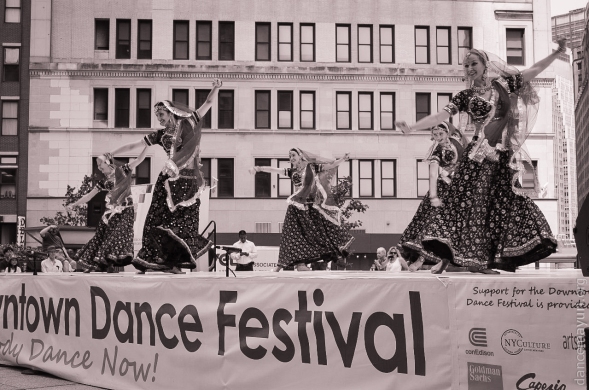 For 25 years a whole pleiad of fabulous soloists, who dedicated their lives to the Indian art, grew up. They pursue their dance career professionally and have already brought up students whom they can be proud of.